Statistics on the demography of Middle-earth based on LotrProject's extensive database of characters. Based on 982 characters from the Hobbit, Lord of the Rings and Tolkien's posthumously published works including the Silmarillion.
Population by race and sex
Total
Sex by race
Number of
characters
This graph shows the known characters of Middle-Earth and Aman divided by race and sex. Some races, such as Ents and Eagles, have been excluded.

A majority of the characters described in Tolkien's works are either Men or Hobbits. Men awoke at the start of the First Age of the Sun and much of the later history of Middle-earth revolves around the doings. Considering how long they had been in Middle-earth, very few Men are known by name. The Hobbits are very well-documented due to their interest in tracing their own ancestry and drawing family trees. Despite this, the origin of Hobbit is unknown and all known characters are from the second half of the Third Age.
Only 18 % of the characters Tolkien described in his works are female. This does not mean that his world lacks women but rather that most of his stories are not centered around their point of view.

There is only one female Dwarf described, Ds. She had two sons, Fli and Kli, who perished in the Battle of Five Armies while defending their mortally wounded uncle Thorin. It was this act of courage that made Ds one of very few women included in Dwarven genealogies and the only one mentioned in Tolkien's works.
Life expectancy
Age [Years]
Sample size


Standard deviation
This graph shows the average life-span of Hobbits, Dwarves and Men based on characters with known birth and death data.

When interpreting these numbers there are a few things to remember. The Hobbit lifespan of 96.8 years is most likely a very good estimation. There is a relatively large and well-documented sample size and most of them died from natural causes. The average lifespan of a Dwarf is 195 years which is a bit lower than one would expect considering that the age of oldest Dwarves exceeds 250 years. The reason for this is both the relatively low number of dwarves described in Tolkien's works and the fact that many of them died in battle.

The life length of Men is perhaps the most complex to interpret. To give a complete picture they have been separated by Age and and into Men of Nmenorean blood (including descendants) and regular Men. Since the Nmenoreans were blessed with long life their average life length was well beyond 200 years. Their descendants shared the same blessing although the life-length decreased over the years.
Life-length distribution by race
This graph shows the distribution of character ages for Hobbits, Men and Dwarves. It is important to understand the underlying data and the characteristics of each race.

There are very few Dwarves with known age at the time of their death and most of the ones that are known died in battle. The longest living Dwarf was Dwalin who lived to become 340 years old, 80 years older than the second oldest Dwarf.

Hobbits lived a very quiet and uneventful life compared to other races and since they had the habit of drawing their family tree their age distribution is fairly narrow.

Men show some interesting characteristics suggesting that there are three different mean ages. One for regular men close to 80 years, one for Nmenoreans and their descendants at about 200 years and finally one for the Nmenoreans of royal blood close to 400 years. Elros who lived to become 500 years is not included since he is a Half-elf.
Show on graph
Middle-earth inhabitants by year
We will never know exactly how the population of Middle-earth changed over time but we can visualize the characters Tolkien choose to describe. This graph shows the known population as it changed over the years.

The large spike at the end of the First Age indicate the characters mentioned in the Silmarillion. After that, most Men with recorded death and birth date are of royal blood.
As you can see there is a spike in the number of Hobbits around the end of the Third Age. Hobbit found great joy in tracing their family relations and drawing family trees and this is why many of them have known birth and death dates. Despite this fascination for geneaology they had lost information of their origin and relationship to the rest of mankind. It is only known that they once journeyed from the Vales of Anduin in the Wilderland.
Show on graph
Longevity decline of Men
Age [Years]
This graph shows the age of the various leaders of Men of Nmenorean blood throughout the history of Middle-Earth.

It is explicitly stated by Tolkien that the longevity of Men once granted to the Nmenreans decreased over the years. In Letter #156 Tolkien writes that "a good Nmenrean died of free will when he felt it be the time to do so". With the Shadow and the Downfall of Nmenor this grace was taken away from them and they started dying involuntarily. They continued to live longer than regular Men but their lifespan shortened over the years.

The decreasing lifespan Tolkien mentions can be seen clearly in the graph. The most dramatic change can be seen shortly before the Downfall of Nmenor.
The leaders in the graph are shown in order. Their number should not be confused with how many generations from Elros Aragorn is since there were more than one line of leaders.

The last bar represents Aragorn and you may notice that it is noticeably higher than many of his close ancestors. This is explained in The Tale of Aragorn and Arwen where it says: "I am the last of the Nmenreans and the latest King of the Elder Days; and to me has been given not only a span thrice that of Men of Middle-earth, but also the grace to go at my will, and give back the gift. Now, therefore, I will sleep."
Show on graph
Oldest, youngest etc.
Oldest and youngest
Men
500 years Elros (Half-Elf)
421 years Tar-Atanamir
412 years Tar-Ancalims
411 years Tar-Amandil
411 years Tar-Telperin
31 years - Hardang
30 years - Huor
26 years - Nienor
22 years - Ran
3 years - Lalaith 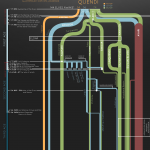 Timeline of the Elves
View infographic 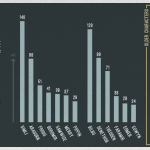 Character age in the Lord of the Rings
View infographic 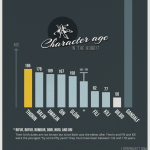 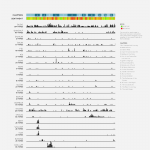